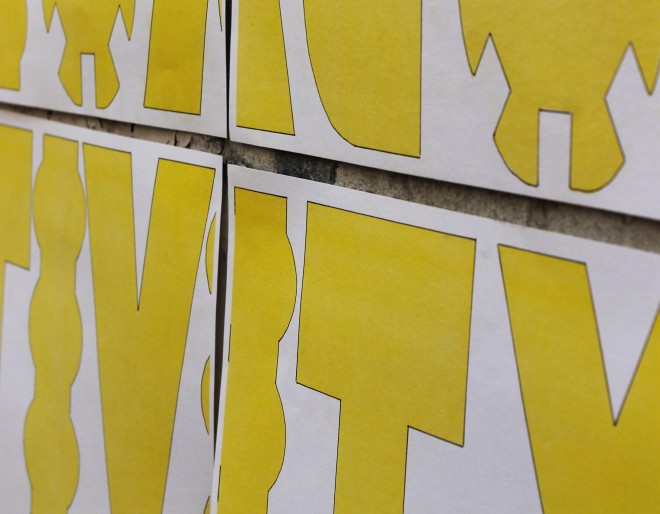 Posted on May 7, 2017May 10, 2017 by purolaevuo Posted in Development, Projects, Studio ImpressionTagged risograph, summer show publication

On Friday we continued experimenting with riso printing the signs for the summer show catalogue. This time I moved to the stage of dividing my design across the four A3 sheets. I started separating the sign into two different layers until I realized that I don’t need to do that if we only are going to use only yellow ink to print it. All I need to do is to turn the image into black and white.

After the image was black and white, I tried to divide the design into four same sized quarters. I was stressing about how to do it so that the pieces will fit together perfectly but in the end it wasn’t that difficult at all because Photoshop tells you where the middle of the document it. So, I got it done in no time, and then I printed the four black and white quarters out in A3’s.

The troubles started when I started riso printing. For some reason it didn’t come out well. The ink was uneven and the color was very light. The shadow part of the image didn’t show at all.  I tried to adjust the contrast and create a new master but that didn’t come out any better. Then Sara happened to walk in so I asked her for help. She tried to adjust the contrast too and change the image type from line to photographic. Then we tried again, but the result was just as bad as before. It stated getting a bit frustrating because no one knew why the printer was acting like that. Another student tried printing her design too and it the result was the same as with mine. But then Angharad came and she knew that sometimes you need to print a few more copies before the ink starts to come out well. The other student tried that trick and it worked.

Part of the reason why the shadow didn’t show at all, might have also been that the shadow was very light grey in the positive and in the one that I experimented with on Tuesday, the shadow was a bit darker. On Tuesday the prints came out fine. So, before I tried again I made the shadow a bit darker and printed the four sheets out again. Then I went to the riso printer and tried printing the sign again. After a few copies the sheets came out perfectly. I felt a bit stupid considering how much fuss the whole thing caused and how simple the fix was in the end. Just print out a few copies and it is all fine. I will remember that in the future!

In the end of the session, I drew the outlines of the letters in one of the experiments just to see what effect it has. I think the sign looks much clearer with black outlines. However, I know that we can’t print outlines since only one color is allowed per sign. It’s a shame. 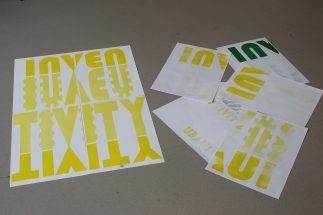