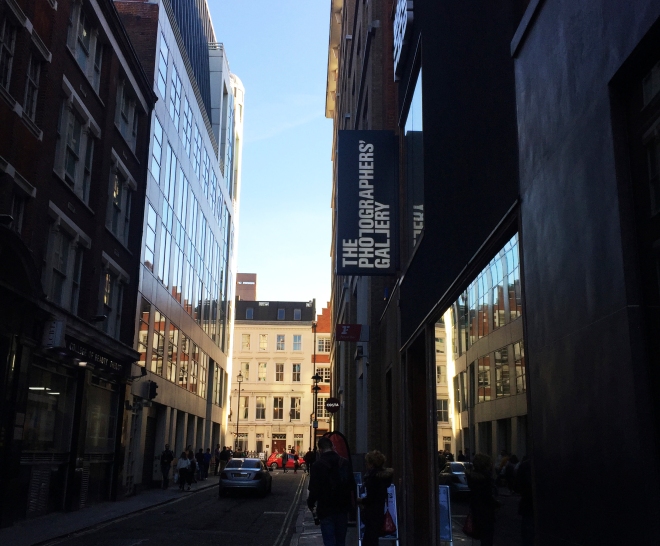 Today I went to visit The Photographers’ Gallery near Oxford Street. Since we got loads of ideas from The National Gallery’s poster exhibition when we went there as a group, I thought it would be good to go to another one to see different solution options.

In The Photographers’ Gallery I went to see the Instant Stories – Wim Wender’s Polaroids exhibition. There were some similarities to the poster exhibition but also some new ideas. The polaroid exhibition definitely had its own identity but it had been created still to match the gallery’s unified identity. Everything was hung on the walls in frames, spaced out evenly, white walls, clean and well-lit. I visited the  The Photographers’ Gallery in the end of September also when they had the Gregory Crewdson: Cathedral of the Pines exhibition there. I remember that the space was very similar back then too, only the pictures exhibited where bigger. For another comparison, today I also took a look downstairs at the second floor where they had the 4 Saints in 3 Acts – A Snapshot of the American Avant-garde exhibition. There again some of the unifying things were repeated, like the spacing and framing but the color scheme was not bright white but a combination of grey, black and white.

The main element that was used to create individual identities for the different exhibitions was typeface. Even though the display solutions were similar, the exhibitions were given their own typefaces that followed throughout the exhibition. The Wim Wenders exhibition today had a typewriter typeface. They had decided to use that typeface probably because it went well with the polaroids and the time period. 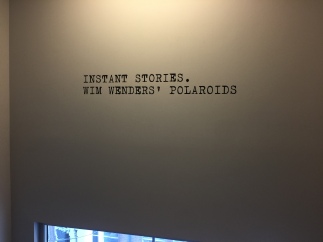 Just like at the National Theatre poster exhibition, here too they had a book accompanying the exhibition. People could browse through it at the exhibition or buy it from the gallery’s gift shop. The typewriter typeface was used in the book as well.

One thing that I found really cool was a comment wall in each exhibition space. People could leave their comments on it about the exhibition. I think that we should have a comment wall like thins at our summer show. That way people could leave comments which could be fun for them, and then later we could collect the comments and get feedback on our work and see what the visitors thought about it.

One thought on “The Photographers’ Gallery”