Today me and Hannah went to uni to do cover mockups for the Anthology book. All the mockups were different adaptations of spiral binding. The whole session took us about 3 hours and we accomplished a lot in that time. I think the process was really useful for us in order to notice which cover concepts work for this book and which don’t. In the end of our little workshop me and Hannah had a clear opinion of which cover we think is the best for the Anthology.

We started by cutting A3 paper into A5s with the electric guillotine on our floor. I had no idea where that was let alone that we can use it freely. You just need to get the key from the office. Damian gave us a short introduction to how it works, which was great. It’s good to know for future reference, I might need to use it again for something else.

When we started punching holes into the pages with the spiral binder we noticed that it is quite time consuming. If we are going to make 300 copies of the book, we need to have some kind of system where one person does hole punching, one is ready to always give a new stack for punching, and maybe one who re-collates the hole punched pages into a book. The other must then insert the spirals into the holes by hand. We noticed that the electric machine can’t insert the spirals when the book is the maximum thickness. But if we have many people doing it, hopefully it won’t take too long. Also, clipping the stack of paper together with a bulldog clip helps keeping the holes aligned.

We also noticed that the electric guillotine doesn’t cut the pages exactly evenly. When we are punching holes some pages were slightly bigger than others. A possible solution to that could be that the chapter teams leave enough margin in their design so that we can trim the edges of the books afterwards. Another solution could be buying A4 paper which would decrease the possibility of different sizes at the guillotine stage. Then we would only cut the paper in half. 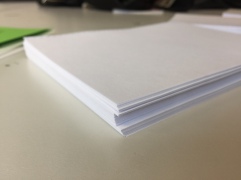 The covers that we tried were: 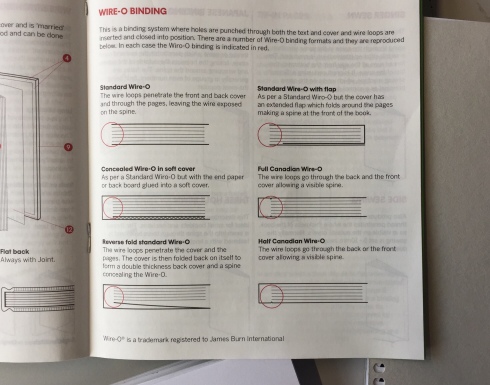 We thought that the standard spiral binding is too boring but we made it anyway to have something to compare the others to. The half Canadian binding was really fiddly and when compared to the others, showing a bit of the spiral seemed pointless. It also reminds of a recipe-scrapbook. We think the two best options are the Reverse fold standard spiral and the Concealed spiral binding. They both work with a similar principle but the concealed binding is probably easier to produce 300 times and it is more secure because the back is glued. The reverse fold binding more fiddly because it it’s based on just folding a long piece of paper which is only bound in one end. Still the outer appearance of the cover is the same as in the concealed spiral binding. So we would suggest that the Concealed spiral binding is the best option for the Anthology.