Yesterday I continued working on my portfolio. Since I wanted my portfolio book to be white, I thought that it might be good to have a slipcase for it which would protect it from getting dirty. I hadn’t really planned much how I would make it which made the process much more challenging and time consuming as I noticed. I had looked at a few guides and tutorials a week ago but the idea of it seems so self-evident so I didn’t need it by my side when I was making it. That was mostly fine, the problems arose when I kept cutting or gluing pieces without thinking it through first. I had to make a couple of experiments before I got it right. I also had to improvise a bit along the way.

I made my first try from a normal black card. It was easy to handle and fold but the slipcase was way too flimsy. Also I didn’t get the measurements quite right because the sides were bulging outwards. I think one of the sides must have been a tiny bit taller than the other. I also made the spine too think. There was too much room left around the portfolio.

When I knew that the experiment was unsuccessful anyway, I thought I’d tried the cut out name on the side of the slipcase. I think it looks nice but I can’t really just cut it with a scalpel. It looks unfinished and messy. Maybe I could do that if I could laser cut the text but it’s too expensive for me right now. 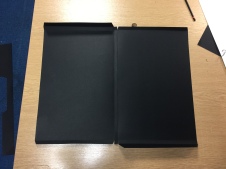 For the next versions I used grey board. It makes the slipcase much sturdier which is good. But grey board had to be scored before folding. And I accidentally scored the board on the wrong side a few times which was frustrating. I also noticed that because the board is much thicker than card, I need to take the thickness into account, otherwise the bottoms and tops can’t overlap. 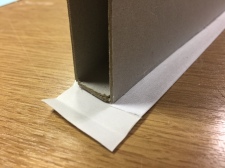 With my third trial I managed to get all those things right that I had noticed or got wrong with the previous versions. But I still faced new issues along the way like how to cover the ugly scored and clued edges. Luckily I had some of the white cloth left that I used to cover the book covers with. So I used that for all the edges and folds. When I was covering them I kept gluing the cloth down and cutting of pieces before I thought it through. I also only had just enough of the cloth for the edges, no spare cloth at all so if I made a mistake, there would be no trying again. That created some unnecessary challenges but in the end I managed to fix them. 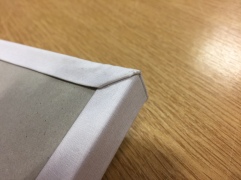 The fit is perfect for the portfolio which surprised me. I was worried that it would be too big like the first try or, even worse, too small in which case it would be unusable. There is a bit room sideways to add a few pages in the future to the portfolio.

I quite like the light greyboard color with the white covers but I still need to figure out how to print my name on it. I think it looks like there should be something printed on the side.